Pictures from the run the other day

Conditions were - horrible - it was dso dusty that it looked like brown snow. 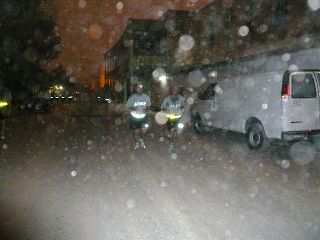 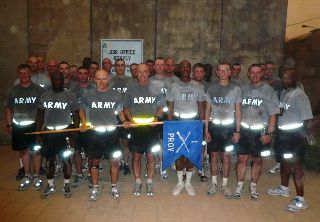 New Diggs - Here and there.

I scored some furniture for my new room the day after I moved in. We are now living in Saddam's second wive's palace area (the support buildings) - and there is a LOAD of kitch - gaudy - cheap - furniture for the taking - so I pimped my ride...errrmmmm....room. The other pics are a couple of the new house - we close Monday - Yay! Pics below that fold.

Beat down tired today After a frackin four miler with the CG, who BTW, LOVES to run - I hate to run...nuff said - we then had a overwatch mission for P4 - Bye pal! Pics below da fold. more...

Recent trip to Najaf with the DPM of IZ

Your guess which one

We flew down with the newly re-constituted Iraqi AF on a 40 year old C130. Yay! We flew down with the PSD and strap-hangers for the DPM of Iraq. Those guys had some pretty trick Kalashnikovs and mostly wore 5.11 clothes with IZ made plate carriers and kit - kind of a stange dicotomy. Our first attempt was during a shamaal (sand storm) and the new Najaf International Airport is VFR (Visual Flight Rules) only. On appraoch the senior C130 Pilot, USAF Advisor had them pull out as they could not see the runway due to the sand. The MAJ said that it was a good thing that we didn't know how close we were to snuffing it. Thanks. for. that. Yay again! More below the fold.