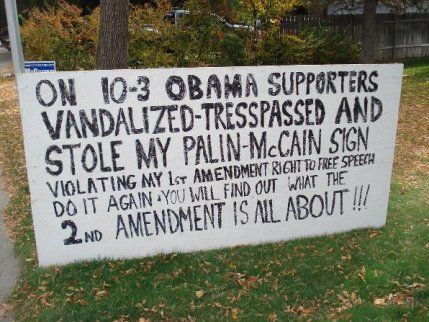 My question is - Why is dissent against the Obamessiah a thoughtcrime? It seems to me that any criticism of the anointed one is met with vapid cries of racism or the more subtle complaint that only those with right-wing extremist ideals would look deeply into the motivations, associations and motivations of Barry the Great. (continued below the fold)

Fire in my office

Stoopid Hajji wiring - it was the fluorescent lighting that caught fire, fell from the ceiling and landed on an office chair - which was then a big toxic torch. The office was apparently filled with thick black smoke - (I was running a 25 min 5K BTW - not great I know, but I hate running) - and one of our self appointed standby HEROs decided that since he couldn't actually SEE the frakin flames he would empty extinguishers one after another until the smoke stopped. (it looks like if he had just let it burn for a few more minutes, it would have self -extinguished - MAYBE  - due to no O2 or fuel) GRRRRRR>>>> 50-70 POUNDS of dry-chem fire suppressant in every nook, cranny, and part of all the PCs and printers - my body armor, etc - GRRRR....the hajji contractors have been pulling EVERYTHING out of the office (Me the CO and the ADMIN NCO share the office) while the rest of us try to de-dust our personal stuff - then they are replacing the fixtures - and the AC which got a little melty and then painting the office with a fresh coat of whitewash. Not happy today.

the worst part was you and the CO in the platoon office snagging computers like it was cool to do.

It is good to be King

Wow. Barry Hussein Obama is at fault for the housing market collapse

It seems at least partially. Over at the JAWA there is a story that seems to be something that McCain and Palin should be hammering home right now. Of course you can't mention that Barry sued CitiBank for allegedly "redlining" mortgages in low income neighborhoods - racism style, and call it what it is without being accused of racism. Barry's race-baiting of CitiBank doesn't even pass the logic test - but then apply it to the overall economic situation, his socialistic tendencies and the accusation of the left that "deregulation" caused the crisis - and I might be able to gin up a conspiracy theory. It seems that the Obamessiah might be the REAL Manchurian candidate after all. His commie pinko terrorist buddies like Ayers and he may be Machiavellian enough to cook up a plot -

Such as - A grand scheme to crush the Capitalist pigs with their own greed...and...IF they aren't more greedy than they are cautious - then we will SUE them into handing out sub-prime crap mortgages to the unworthy (credit-wise) by accusing them of racism. Hence - the market will eventually collapse on itself - and we can Federalize everything in the interests of "saving" the working people from the evil Capitalist pig bankers and true Socialism is a mere step away! All we have to do is get that "Maverick" McCain to up the ante with even MORE taxpayer cash - MuWAAAhaAHHaahAAH!

So here are the much anticipated pictures from the TDY trip - one sample - the rest below the fold.

Me and the MasterBlaster French Commando on the C17 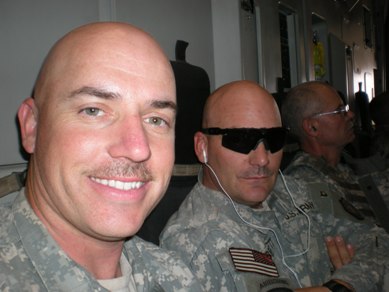 2 The pictures are great. One of my favorite cities to visit is Philly. It all happened there. Take care.

Man it sure was good to talk to you guys.  I am glad you were able to be stateside if even for a bit.  Hope your trip back to IZ was wonderful..haha.

Its too bad you didn't have time to visit LEXINGTONSHAMSHIRE while you were here...hmmm pity(in my glorious affected bri-ish accent).