Hatemongering - Ayn Rand was SO right -

A fellow sevicemember sent this to me - and it is all about hating on Dubai (UAE) for being a capitalist country.

This is interesting to me because it attacks successful productive capitalists for - - being successful - and stirs sentiment that is based purely in emotion and not in logic or fact - I think the motivation behind this piece of work is *exactly* why we are failing in the global economic realm.

I am exhausted - another day of dodging mookie’s stuff and I think I have "Saddam's Revenge" yuk.

But ya did piss me off-

For those who are following along at home - Mookie tried to get us again today - butcha missed me again dincha - bitch.

BLUF - Missed me ya bastard.

I suppose you have all read the news this morning - if not:

and YAHOO have most of the info -

But also know that the media NEVER gets it exactly right - I can't speak in absolutes - but suffice it to say that Mookies boys lobbed quite a few more than 10 at us yesterday - Phucerz.

Right now there is this huge debate over how to stimulate the economy of this beleaguered country we U.S. soldiers affectionately refer to as Iraq . One of the best solutions to date is a plan to revitalize the dormant tourism industry of this nation full of historical wonders! Now a lot of you westerners (aka infidels) are going to stick out over here, so here are some things you're going to want to do to keep from alarming the locals. Now remember, this list isn't complete. You'll need to check with your local travel agency to get the complete list of do's and don'ts. Here you go:

OMG - I think I am in man love with Hans Gruen - we need to put this before congress and ratify it IMMEDIATELY!

Back to the incident just after we moved in -

I went to the CSH (Combat Support Hospital - the modern day successor to the venerable MASH - Mobile Army Surgical Hospital) to "swipe in" so that they can track my health care while in Iraq.

The long faces and blank stares were all I needed to see to know that they had lost one - they saw the knowledge in my eyes and recognized one of thier own - as did I.

Brown and ACU patten NOMEX uniforms bearing the insignia of the AIr Force and Army - Senior NCOs, Officers and junior enlisted all milled about waiting for news of the rest -

Dusty faces streaked with the trails of tears - belied the humanity of the professionals that even in this time of crisis, neatly lined up body armor against the walls of the hospital.

Defensor Fortis my Brothers and Sisters.

RAMBO IV *** - A pretyty decent flick for what it was - and finally the movies get the effect of a M2HB sorta right.

THE KINGDOM ***** - A MUST SEE - again the movie industry gets it right. You want to see how evil the enemy is - watch this

So here is a bitch about the Army...

They have this new thing called "Eagle Cash" - this is, in my humble opinion, a racket - looting @ it's finest - brilliant use of the art of flim flam in order to make money, cheaply -

Here is how it works -

The Army issues you an "Eagle Cash" smart card.

You use the card @ select locations (almost everywhere in CENTCOM AOR)

There is no fee for you to pay

HERE is the REST of the story -

The Army is working its way to requiring an Eagle Cash card for *any* transaction in CENTCOM. You already MUST have one to draw casual pay or write a check in Q8.

I am thinking that *someone* sold the Army a bill of goods - and are pushing for it to be the *only* way for a Soldier to buy anything in the CENTCOM AOR. Meanwhile, they make millions on the $ that is "stored" on those cards. 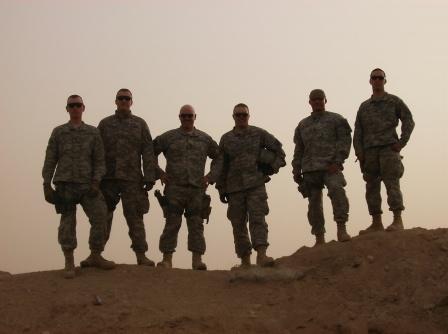 Its down south of Baghdad - it was a long day - but we were happy Soldiers - we weary few - we band of brothers...

So today was fun... Had a bit of a trip out in the red - that was supposed to be a pretty fluff mission - that turned into a dismounted patrol out in the streets of Baghdad - I really can't go into any detail -  but suffice it to say that there were some pretty high speed Iraqi Airborne MPs out there that backed us up - it was good to be back in the red - it felt REALLY good - that may sound nutz to some of you - but there is, ironically, just a bit of peace that comes with being totally in the zone - - hot as hell - - scaning rooftops - - watching hundreds of people - - feeling the reassuring familiarity of the grips of my M4 - - checking on the principal - - the weight of your vest, plates and combat load -- not thinking about the mechanics of your movements - - they just happen - - you find yourself moving in autopilot as your sensors are tuned in like the bionic man - - ready for everything - - placid like the surface of a lake - - staying frosty as hell - - mmmm....good stuff....

Wow - This is gonna be a crazy year -

Well, our first week or so has been madness on so many levels - I still have a LOT of notes to convert to stories - But I will hit the highlights quickly -

We spent some time south of Baghdad training on the ranges (yes MORE ranges!) OK - I can't resist - 1 QUICK story - heh - I can't even write this without laughing - So no shit - there we were, on the machine gun range and we were almost done when the CO decided that he wanted to get down with our Para-Minimi (Shorty M249 - very Gucci kit) - So while he went to get is battle rattle on, the outgoing 1SG and I decided to play a little joke on him....So we popped the top on the drum of 5.56 and placed the belt in backwards, then replaced the top and placed it back in the carry bag- giggling like schoolboys the whole time - When the boss came back over he dutifully took the ammo and strolled out to the firing line. Now you have to picture this - this guy is hard core - a Ranger, combat vet and is generally switched on. To top that off his safety is our most squared away SNCO- also a combat vet and knows what the hell is going on. So there they are about to load the SAW and spend at least 3 minutes trying to figure out why the drum is fitting but the bullets are going the wrong way. Turning the drum one way and the gun another...all the while the other 1SG and I are about to die - laughing ourselves into a headache. They finally figured it out, when they noticed that I had a Joe filming the whole thing. (Video will be up on YouTube soon!)

We were in the CSH while the wounded were being worked on - there was 1 KIA - They were all MP types - the guys hurt were Air Force Security Forces- I will post more about that later...suffice it to say that it sucked - DEFENSOR FORTIS MY AF BROTHERS!

Then the day before we got back IDF took the lives of two guys in our AO - one from our command...that sucked pretty bad as well...

BUT - it is still *relatively* safe in our area, so no worries...

On the upside of things we have completed close to 20 missions already without a peep outside the wire - ironic, no?

Another up note is that the outgoing unit has adopted a family that lives in our AOR. They are the REAL poor - they are fans of GWB and America, and they are targets of the baddies. In fact they took a round of IDF on one of their dwellings in the last week...one 3 year old boy slightly wounded (in fact the one on the right in the pic)...grrr...In the near future I will be trying to organize some relief for these folk...I will post what they need here. Those of you who would like to help out can reach me in the usual ways. 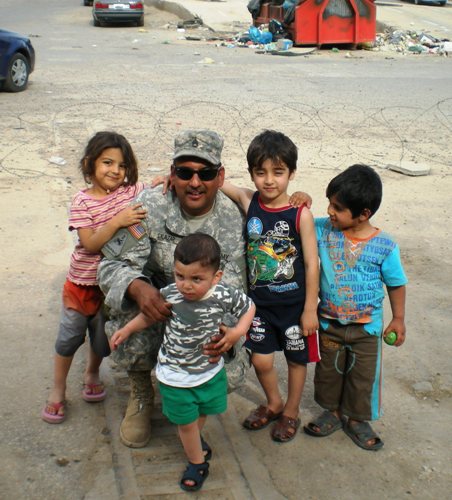 See ya all soon.

A quick check in - 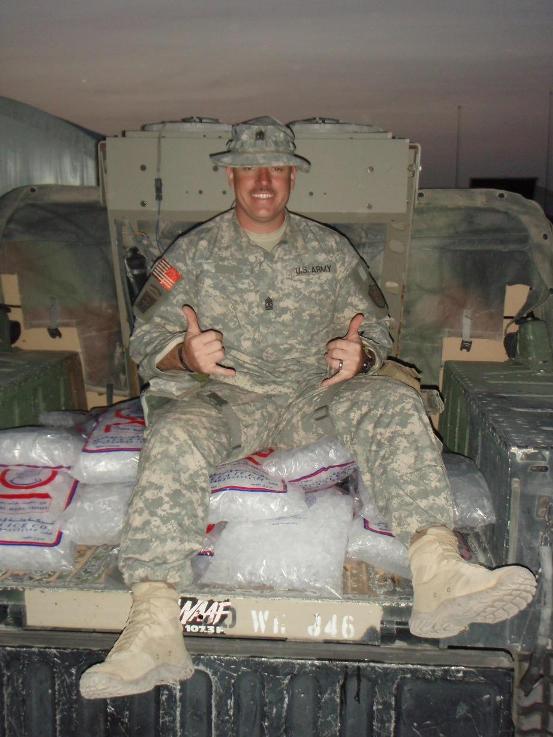 Quick note - Leaving Q8 today will be in the IZ 2nite

I WILL NOT SUBMIT

Watch Fitna - It is just a Presentation of the facts.